In The Wizard of Oz, a runaway teen finds herself transplanted to a strange land, only to awaken and learn it was all a dream. In Planet of the Apes, an astronaut awakens to find himself in a strange land, only to realize he is still on Earth. The Omega Project ups the ante on both adventures, and neither the hero nor the reader will know the true reality until the very last page. Robert “Ike” Eisenbraun and his fiancée, Andria survived the Great Die-Off of 2020-2025 when the world’s oil reserves ran out, leading to war and mass starvation. Five years and five billion deaths later, mankind attempts to begin anew, devoting its remaining resources to fusion energy – a clean-burning system that requires Helium-3 to forge a stable reaction. One problem: He-3 only exists on our moon and Jupiter’s ocean moon — Europa. Man is ill-equipped to exist in near-zero gravity; the mining equipment will be operated remotely using GOLEM, a super computer programmed by Ike to “protect and preserve the human race.” All goes well until the computer determines the mined He-3 isotope to be unstable and takes it upon itself to jumpstart a mission to Europa. GOLEM designs Oceanus, an underwater habitat, and selects six men and women — including Andria — for the six year mission. Has GOLEM gone rogue? Ike is charged with finding out – he will join the Omega crew on a 45-day training mission beneath the Antarctic Ice Shelf where the crew will spend the last thirty days of the prep cryogenically frozen. Ike arrives, only to learn Andria has been sleeping with her commanding officer. Over the next two weeks Ike is tempted by a beautiful marine biologist who keeps a pet squid named Oscar and is unnerved by an exotic Chinese Buddhist who determines his presence onboard will “alter history.” The night before the Big Freeze, Ike reconciles with Andria – only to be forced into his cryogenic pod by the men, who accuse him of working as a spy for the coal industry. Time passes. Ike awakens to find Oceanus collapsing into a sea trench, the ice gone, the world changed dramatically. Either he is still asleep, caught up in a vivid Omega dream — or the moon was struck by an asteroid on October 26, 2028. Twelve million years has passed since humanity went extinct, evolution competing with GOLEM, who has genetically-engineered a race of transhumans to slaughter man’s intended successors — an intelligent species of land cephalopod – the future of our planet at stake. 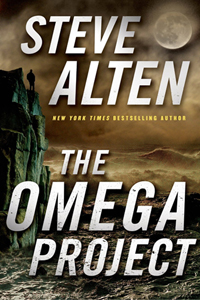