Welcome Readers!
This website is dedicated to my readers, to whom I owe my career. I take your patronage very seriously, which is why I pay attention to every detail when crafting a novel, from the story line and research to the interior and exterior artwork. I want you to feel a part of the work as well. If you Sign Up for my FREE Monthly Newsletter, you’ll receive the inside track on movie updates and contests to become a character in the next Steve Alten novel, as well as living tips and entertaining info guaranteed to put a smile on your face. While I’m on Facebook and Twitter, the best way to reach me and get a personal response is via e-mail at Meg82159@aol.com

If you read MEG 6: Generations then you know that the series will end with MEG-7: Purgatory. My publisher, Tor/Forge will print & distribute hardbacks in the summer of 2023 when MEG-2: The TRENCH hits theaters. Because of the rise in paper costs, these books will be bare bones; i.e. no maps, interior artwork, or the extras that usually come with a Steve Alten novel.

That is NOT what I envisioned for the last and potentially BEST novel in the most important series of books I have written – a series that finally hit the big screen after a 20 year wait – a series that remains the driving force in my 501C-3 non-profit teen reading program, Adopt-an-Author (22 years and still going strong), helping reluctant readers like many of you were back in high school to read. No sir, the MEG series deserves a far bigger and better send-off AND SO DO MY MEGheads, my most loyal and appreciated readers – without whom I would have no career. If you were one of the lucky fans who managed to pre-order the MEG: Generations limited edition hardback (A & M Publishing) then you know how an Alten novel should look. You also know that these 4,325 hardbacks are now selling for $150 to $300+ each IF you can find a reader who wants to sell.

To be published by A & M Publishing, the MP: CLEP will not be sold in stores or on Amazon.com; it must be pre-ordered from one of my websites NOW until the day (to be announced) when the final manuscript is sent to the printers. There will only be one print run.

Front cover (different from Tor’s) will identify the book as a Limited Collector’s edition hardback. Inside will be a certificate on the signature page, along with a number. That’s right – each hardback will have a number matching the order in which books are purchased. As with LOCH-3, all books will be signed by moi, Steve Alten.

Please note: You can only buy ONE book per order for numbering purposes. Please place multiple orders for additional copies. Thank you.

The link above will take you off SteveAlten.com to our store at TheSteveAltenProject.com.

Interior artwork: We will be contacting the best Megalodon/sea monster artists from all over the world, inviting them to participate in our celebration of MEG by creating one of the 20-30 action scenes in the novel (or their favorite scene from one of the other MEG novels) – their works of art to be placed in the final manuscript.

Special bonus sections: To be announced, but we hope and expect to include a MEGhead section. I will also include a special message from our hero, lead producer BELLE AVERY who brought the movie from near-extinction to a box office hit. And don’t be surprised to hear from some of the stars and the other amazing individuals who contributed to MEG over the last 25 years.

SUPER MEG-A-BONUS: (This is really cool) Everyone who purchases three or more MP: CLEPs over the course of the pre-order sale will receive an email about a week after the manuscript goes to print. The email will include a link and password that will give you immediate access to read an Enhanced Edition Ebook (EEE) of MEG: Purgatory (a colorized version of the novel in PDF format) for free. Yes, the EEE will feature the artists’ works in their original color versions. And we’ll be adding much more to come… drawings to win prizes (using your book number(s), raffles to win movie premiere tickets, posters… this will only get bigger & better!

Hey Steve… why is the price so damn high?

This is something special I am doing for my MEGheads and FYI – the profit margin is actually lower than on LOCH-3 or GENERATIONS. Numbering and signing each book is very expensive (insert pages must be numbered by hand and then shipped to me for signing, then sent back to the printer to be reinserted in the books’ spine). With all the extras, the page count alone could be 100 pages or more higher than the bare bones version of the hardback sold by Tor – and if that is what you prefer – no problem – it will still be the same page-turner.

Here’s what I guarantee, and my MEGheads who pre-ordered MEG: Generations know this to be fact: These 3,000 to 5,000 MEG: Purgatory packages will only go up in value – and by the time the novel is finished I can’t even imagine what else I’ll be including. If money is tight (and it is in our home) then do this: Buy 2 copies. Keep one and sell the other after MEG-2 comes out. If the profit is not at least DOUBLE the cost of a single purchase I will personally make up the difference… GUARANTEED!

Conversely, if you wait to purchase a bare bones copy of MEG: Purgatory on Amazon, you could probably grab a used one for $4.99.

Buy three and you will get the bonus EEE color version for free – and make a nice profit on the two books you sell – you deserve it!

Pre-orders for part 3 of The LOCH series (Vostok is part 2) commenced back in February 2018 when I began writing the novel which was to be released when The LOCH movie hit theaters. COVID pushed every studio’s production schedule back, so I took some time off to create www.SeaMonsterCove.com and its two TV series. Things are rolling again with The LOCH: Heaven’s Lake and the break really helped me understand the story and characters better. I have been working on the book seven days a week since May. My goal is to turn the finished manuscript in to my printer December 2021 – January 2022. Over the weeks that follow I will personally sign special insert pages for every copy. From there,, the inserts go back to the printer, with finished books then sent to my amazing assistant, Kelly Rollyson who will ship them to you. If you pre-ordered books and have changed addresses – no worries. Simply email me your NAME & the new address to Meg82159@aol.com Pre-orders will cease once the manuscript goes to print… no other orders will be completed and The LOCH: Heaven’s Lake (Collector edition) hardbacks will not be sold in stores or on Amazon. Like MEG: Generations, we expect the re-sell value to go up big time. Most important – you will LOVE the story!

Click the Button Below to Pre-Order The LOCH: Heaven’s Lake 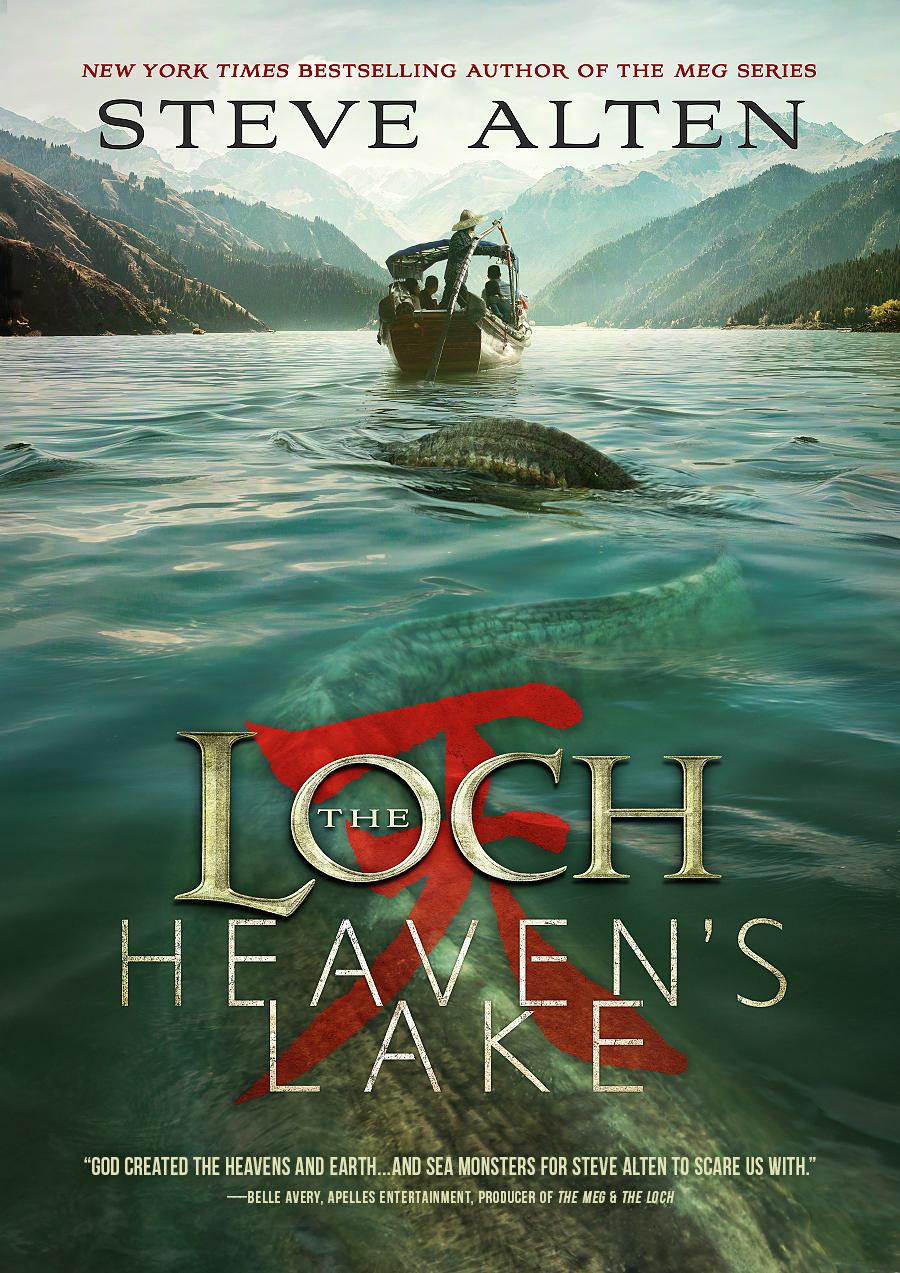 The LOCH: Heaven’s Lake
Prologue thru Chapter 4
and a special bonus!
(plus a personal update and message from Steve Alten)

In December of 2019, I woke up early one morning at 4 am to find myself (at least for now) enjoying a rare moment of peace and calm – no rigidity or tremors shaking me awake from Parkinson’s Disease. It was as if my mind had found its way into the eye of the neurological storm. What happened next was totally unexpected – a wave of creativity came to me out of nowhere as beats in an entirely new giant prehistoric shark story. It was so good and so detailed I knew I had to get it down on paper before I fell back asleep. So I dragged myself upstairs to my office and began searching for the key to the entire story – a remote island that somehow I knew was out there … and there it was – Maug. Five hours later, I had written the treatment to an amazing TV series. And yet, I wanted something more… I wanted to visit the futuristic aquariums featured in the story… I wanted to witness these terrifying creatures swimming around their tank… moreover, I wanted them to react and respond to my presence. I shared these thoughts with my friend and assistant, Kelly Rollyson, and she said, “hell yeah!”

For the next 3 months I put together one of the most original and ambitious entertainment venues every imagined while Kelly recruited an international team of 3D animators, 2D artists, engineers, actors, producers and an ancient shark museum curator – all fans of MEG who wanted to be involved. On August 26, 2020 we launched www.SeaMonsterCove.com an interactive website which serves as the central hub for a virtual experience like no other. First and foremost the site plays host to the most advanced aquarium habitats ever designed – holding the most terrifying sea creatures that ever lived. The special effects are motion picture-worthy, and the wildlife doesn’t just swim around in benign circles; in fact, they are quite aware that you are watching them, and some of them clearly do not like it, especially when you enter their domain to do a little “cage diving.” The exception is Snowflake, our 63 foot, 25 ton prehistoric albino Mako shark (yes… albino!) whose tank in the O-Quarium backs up to the hotel suites in the Black Demon Inn. Snowflake is waiting for you there, circling outside your bedroom window. In each of these 360-degree experiences YOU, the user control the viewing angle, attempting to track the attacks as they happen (day and night versions are available). The action is nonstop and the creatures are so real that it is easy to lose yourself in a reprieve from reality.

Every facility you enter and every creature you encounter will be featured in our episodic TV series, Where Sea Monsters Roam, which tells the story of how these creatures came to be. There will also be a video game where members get to track and capture prehistoric life discovered in a 380 million year old aquifer located two miles beneath the sea floor.

In January of 2021 we’ll launch a Distance Learning Center– an extension of the highly successful ADOPT-an-AUTHOR teen reading program. The site will offer secondary school teachers FREE curriculum materials, projects, quizzes and tests tied to a new prototype version of my novels – “enhanced” with dozens of color images. Since 1999, over ten thousand teachers have registered as participants in our 5013-C non-profit program Adopt-an-Author, which has been called, “the most successful secondary school reading program in existence today.” Much of our success stems from my novels, which are very visual. The new enhanced pdf versions (available in the Sea Monster Cove library) are like nothing else out there. Coupled with all that we offer and will be adding, we believe combining virtual distance learning with entertainment is the way of the future and the only way to ensure an even playing field for all students regardless of race, religion, and economic class.

Watch these videos… then go to the website home page to join.