Dante’s Inferno, written by Dante Alighieri between 1308 and 1321, is widely considered one of the greatest and most revered works of world literature. Divided into three distinct parts (Hell, Purgatory, and Heaven), the poem describes Dante’s journey through Hell, depicted as nine circles of suffering. Allegorically, the Divine Comedy represents the journey of the soul towards God, with Inferno describing the recognition and rejection of sin. Dante composed his life’s work while Europe was suffering through war, famine, the corruption of the Church, and the evils of the pogrom – murderous acts that brutally massacred tens of thousands of Jews. Shortly after Dante’s passing, the Black Plague would strike Europe and Asia – a near “End of Days” event that killed off half the world’s population while giving birth to a new legend depicted in paintings and dance: The Grim Reaper. What few people know is that Dante Aligheri was a student of Kabbalah, a guarded wisdom that dates back 4,000 years to Abraham, the patriarch of Judaism, Christianity, and Islam. Dante’s poem draws inspiration from the Zohar, an ancient text that reveals the spiritual heritage of all humankind. The Zohar also warns of the End of Days, a supernal event brought on by the corruption of man that will be the modern-day equivalent of Noah’s Flood. According to the Zohar, the event will follow the destruction of “strongholds belonging to the future Rome” on the 23rd day of Elul…a date equating to September 11th, 2001. In GRIM REAPER: End of Days, best-selling author Steve Alten takes us on a classic hero’s journey of good versus evil, transformation and redemption. Far more than it seems, the story draws frightening parallels between the lack of morality that corrupted Europe preceding the Black Death and the present-day greed that has mired our own society in economic collapse, two endless wars — and a very real covert biological program, exposed by the author, which could lead to global pandemic and our own self-destruction. Meticulously researched, written in a voice reminiscent of Cormac McCarthy, End of Days is the first book in a planned series that Hollywood might best describe as “the Stand meets Dante’s Inferno.” Adding to the story’s literary feel are nine original drawings commissioned by an artist who invokes the style of Dante illustrator Gustave Doré. 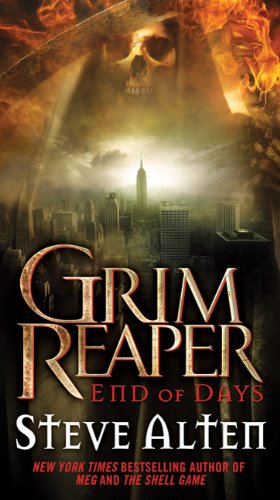