“20,000 LEAGUES UNDER THE SEA meets 2001: A SPACE ODYSSEY, “as a victim of terrorism hijacks the most lethal killing machine ever created. The U.S. Navy designed Goliath, a futuristic nuclear stealth submarine the length of a football field in the shape of a giant stingray. The plans were stolen, The Chinese built the sub covertly, only to have it hijacked by its creator, Simon Covah, a victim of terrorism who witnessed his family brutally murdered and was left for dead. Covah aims to treat the disease of violence by using Goliath and its nuclear weapons to dictate world policy. Among his first demands: Execute Saddam or Baghdad gets nuked! Unlike the U.S., Covah wants and needs no coalition to support hisobjectives, many of which read like a CIA wish-list. As the U.S. President”allows” him to wield his “big-stick,” the question arises of how far weshould go with national defense, advancing our own interests by encroaching on the sovereignty of other powers. One Wild Card: SORCERESS, the sub’s bio chemical computer, programmed with the capacity to evolve. Like a child, it is learning. 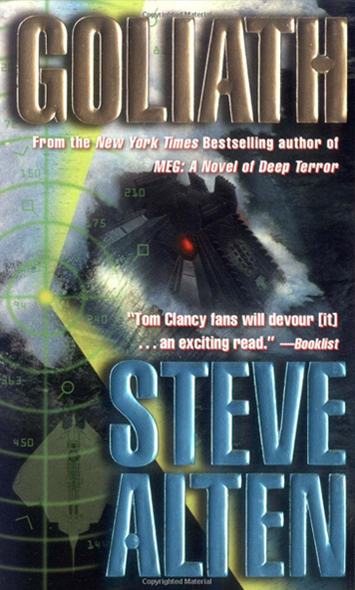